Cutting it with the help of vision technology

The potential of 3D vision, AI, robotics and waterjet cutting technology to automate the traditionally labour-intensive task of trimming of vegetables has already been demonstrated for brussels sprouts, leeks and swede.

Trimming of fruit and vegetables before packing has, traditionally, been a labour intensive process. However, with Brexit ending free movement of people from the EU into the UK there is a shortage of low-cost seasonal agricultural workers. Combining this challenge with the difficulties posed by the need for greater social distancing, makes automating the peeling and trimming process a more important consideration.

Accurately trimming vegetables with good repeatability is challenging because of natural variation. Human operators can decide where to cut, but decision making will vary from one person to another and tiredness during a shift, or some other distraction, has a major impact on repeatability. 3D machine vision with colour and texture analyses can process fresh produce to emulate what a human would do, but more quickly and accurately.

This has been proven by the Scorpion Stinger platform from Scorpion Vision which consists of a suite of matched products including 2D and 3D cameras, Vision Software, LED lights, intelligent control boards and industrial PCs. These building blocks can provide sophisticated 3D imaging capabilities that can be used to calculate an efficient portioning plan.

The 3D cameras utilise stereo imaging technology to identify and locate vegetables in 3D with sub-pixel accuracy, enabling the precise cutting points to be calculated.

Waterjet cutting is a powerful alternative to the use of stainless-steel blades in vegetable trimming. Wax and juice present in brussels sprout stems, for example, can quickly dull mechanical saw blades with smooth edges and can allow for potential cross contamination between sprouts, resulting in a shorter shelf life.

With water jets, a fine jet of water is generated at a high enough pressure to effectively create an endless blade. Using a stream of constantly flowing clean and pure water eliminates the risk of cross-contamination and avoids the costs of sterilisation and changeover of equipment.

Scorpion Vision developed a vision guided robot system to automate trimming of brussels sprout stems to remove the outer layer of leaves ready for packing. The overall solution comprises six SCARA robots and six vision systems based on the Scorpion Stinger platform. The vision system identifies which way round the sprout is on a conveyor, enabling the robot to pick up each sprout and move it for cutting. Special colour filtering methods ensure accurate identification of the stem region for positioning of each sprout, independent of its size and shape. Any defective sprout identified by the vision system falls off the end of the conveyor, while the cut sprouts drop onto a separate central conveyor and are taken to the packaging area for distribution.

Imaging the very distinctive shoulder of leeks, where the main shaft ends and the roots start, using a 2.3 MPixel colour camera with a white LED strobe to create a 3D model, revealed that more than 95% of the images fall into three main scenarios. The system scores each of these using AI in a fraction of a second. The co-ordinates resulting from the highest score are sent to a servo which moves a water blade cutting head to cut the roots at the right point and at the right angle even if the leek is bent or leaning in one direction or the other. For swede, images from a 6.0 MPixel colour 3D camera with a white LED strobe are used to calculate where the cut lines should be placed for topping and tailing. The cutting coordinates are then sent to servos for two conventional circular cutters for accurate topping and tailing.

The brussels sprout system can pick and cut 210 kilos of sprouts an hour. Leek roots can be removed with 97% accuracy, as fast as two leeks a second and swedes can be topped and tailed more than twice as fast as human operators. 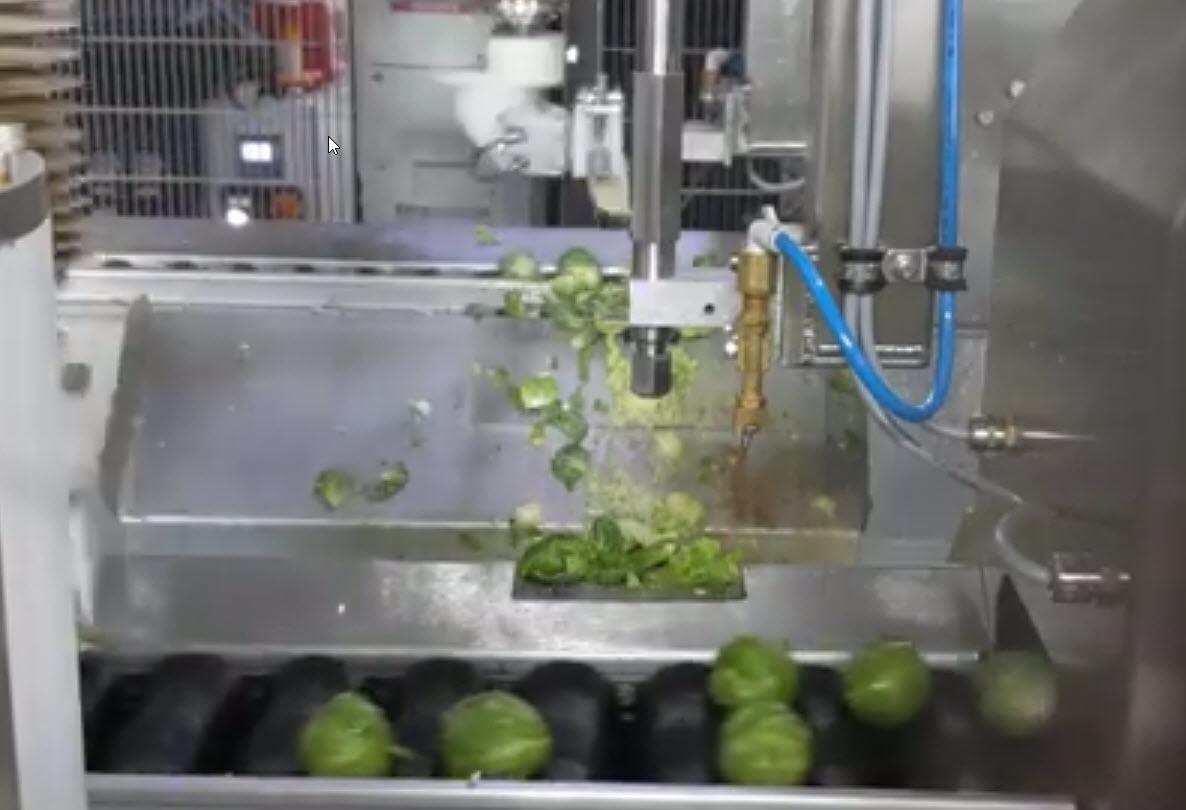